Last night, I took my daughter to see One Direction and 5 Seconds of Summer play here in Atlanta at the Georgia Dome.  The tickets were a gift that her grandparents bought her for Christmas almost a year ago,  It's a bit crazy in my mind that we need to buy tickets for things like that quite so far in advance but given how hot both of these bands are right now, I am not surprised they sold out.  She has been looking forward to the One Direction concert for 10 months....needless to say, the excitement of the night was fairly intense for us, along with thousands of other teenage girls in the Atlanta area.  I did not get free tickets, paraphernalia, back stage passes or any other perks to attend this One Direction concert.  Not that I didn't try, of course...but apparently One Direction doesn't need small time bloggers like me helping promote their concert.  Really?  I am shocked!  So, what did this only slightly hip middle aged mom think about the One Direction/5 Seconds of Summer concert?  Let me just let you in on a few bits of wisdom:

A One Direction Concert Wrap-up:

1.  Whoever thought that a Wednesday night concert was a smart idea should be shot.  This is Atlanta, people...we have some of the worlds WORST rush hour traffic.  Put together millions of people trying to get HOME and millions of people trying to get to the concert and you have traffic gridlock the likes of which you have never seen before.  It took us 2 hours to travel a distance that usually takes less than an hour.  It took us 30 minutes just to go 1.2 miles as we struggled to get to our parking lot.  Thankfully we made it to our seat with less than 5 minutes to spare before the opening act started. 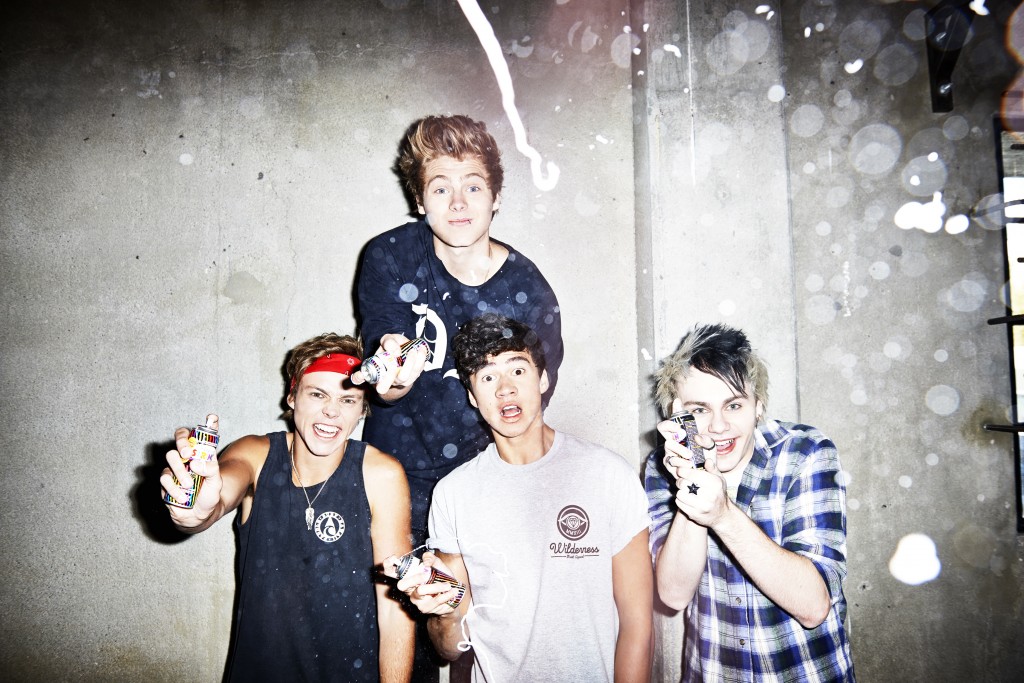 2.  Thoughts on 5 Seconds of Summer:  I actually liked a lot of the music they played.  I had, of course, heard most of it already streaming from my daughter's kindle.  This band is described by People.com as a group of Aussie punk-rockers. Members  Luke Hemmings, Calum Hood, Michael Clifford and Ashton Irwin are touring with One Direction this year but will strike out on their own in 2015. Yes, my daughter is already begging for tickets to see them.  I may have to conveniently forget to tell her grandparents.   My personal favorites of the selection of music they played are probably She Looks so Perfect and Amnesia.

(I will say that the acoustics were pretty bad in the Georgia Dome for this concert...definitely NOT a great venue if you really want to hear the nuances of the music.  Since all I heard was just screaming teenage girls it didn't really matter.  I could barely hear the music over their hysteria anyhow.)

3.  Who the heck allows their daughters to dress like that?  Can I just say that some of these tweens looked like underage hookers?  I kid you not!  There were girls with jog bras covered by a 'shirt' that was really just 2 threads and a button.  They had makeup slathered on their faces and shorts so high up that their cheeks were hanging out.  Where the heck are these girls parent's when outfit decisions are being made?  I stood there and watched a 10 year old girl shake her boobs to the music AND SHE DIDN'T HAVE ANY YET.  Seriously, people, you need to rethink what you let your kids wear out of the house unless you want to be a grandparent at a very early age.

4. We really didn't need a 90 minute intermission.  Yes, you read that right. 90 minutes between when 5 Seconds of Summer left the stage and One Direction came on to play.  I have to assume that something was horribly wrong for there to be such a delay. Faulty equipment?  A puking band member?  Maybe somebody lost their guitar pick.  Who knows...because not a single person actually came out to tell us anything.  We had plenty of time to hit the bathroom, buy a drink, and heck even take a nap. The dad in the row in front of us brought ear plugs and slept through half the concert.  How he managed that, I do not know.  Between the screaming girls, the ear splitting music and the literally SHAKING floor of the Dome, he must have had some kick butt sleeping meds to konk out like that. 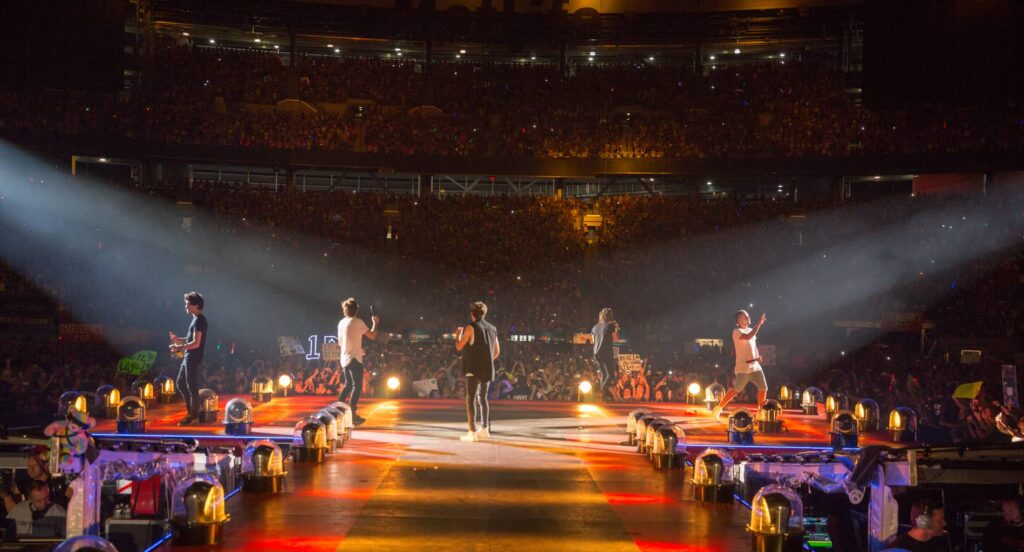 5.  One Direction,,,the star of the show!  So, if I thought the decibel level was bad during the 5 Seconds of Summer portion of the show, that was nothing compared to the hysteria that ensued when One Direction hit the stage.  In fact, during intermission the girls would go insane when a commercial for One Direction played on the big screen.  Really?  I don't get it.  It's a TV, people!  But, the One Direction portion of the concert was a nice mix of old songs I have heard so many times I know them in my sleep.  and new ones that I don't quite have memorized yet.  I's sure my daughter will remedy that by the end of the year.   Check out the One Direction YouTube channel to listen to some of their music.   I tend to like the older stuff... Best Song Ever and What Makes You Beautiful are still two of my favorites from them.  I will say I liked their cleaner cut look from a few years ago. The boys are definitely getting a bit older and I see more of a harder and scruffier edge to them than they had a few years ago.  Except for Niall...he's still a cutie...and that Irish accent!  Love it!  The new music is catchy too, just haven't heard it as much yet!

6.  Just watching my daughter's reaction made it all worth it!  This was my daughter's first concert.  She made herself a One Direction hair bow  and decked herself out in assorted 1D bling.  I think she hopped, skipped and jumped her way from the car to her seat.  When 5SOS came out on stage she was practically vibrating in place and fanning herself.  The girl who flat out refuses to sing in public was belting out the lyrics with such abandon I had to video tape her while she wasn't looking.  It was honestly priceless.  Her shear joy and amazement was palpable  as she gazed down on the stage to watch One Direction play.  It reminded me of old videos I have seen of Elvis of The Beatles in concert where girls were passing out from the excitement.  This is an experience that she will remember for the rest of her life (I hope!) and since I spent more time photographing and videotaping HER than the band. I know we will both look back on her first concert with fond memories and plenty of laughter over her reaction!

Have you taken your kids to a concert?  What did you think?