I received a LongHorn Steakhouse gift card for the purpose of this review. This post was made possible by Mom Spark Media. Thoughts are my own.

One of the things I have learned as I have explored my love of gardening is that certain foods grow best during certain seasons.  Choosing seasonal foods in your own cooking, as well as when you dine out, is a great way to reduce your carbon footprint.  Why?  Because those foods are often sourced from areas nearby rather than halfway across the globe.  Along with being better for the environment, choosing seasonal foods means you get more flavor!  A vegetable that is in season is going to be more flavorful than one that isn't and who really wants to eat food that doesn't taste good, right?  Longhorn Steakhouse has a great seasonal menu that spotlights the flavors of fall and I was thrilled to have a chance to explore their new Fall Peak Season menu as well as the Chef’s Showcase menu that they are featuring.  Since I am always up for a nice meal out, I called up my girlfriend and we headed over to Longhorn Steakhouse for an afternoon of good food and a little chitchat! 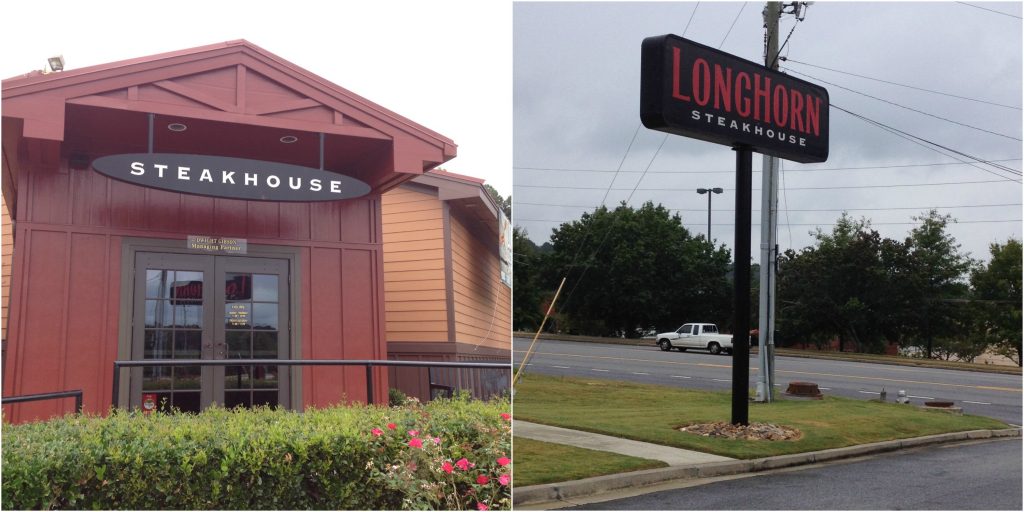 My friend and I were lucky that there was plenty of seating when we arrived and our server was very attentive.  She knew all about the fall flavors at Longhorn Steakhouse and was eager to tell us about them.  It was really a hard choice because everything looked so good and I was starving!  We both chose the combination steak, salad and dessert which was an amazing price for the amount of food we were offered.  Especially after I devoured the warm loaf of honey wheat bread with fresh butter that was delivered to our table!  We were allowed to substitute their Apple Harvest Salad for the traditional side salad for just a small charge. 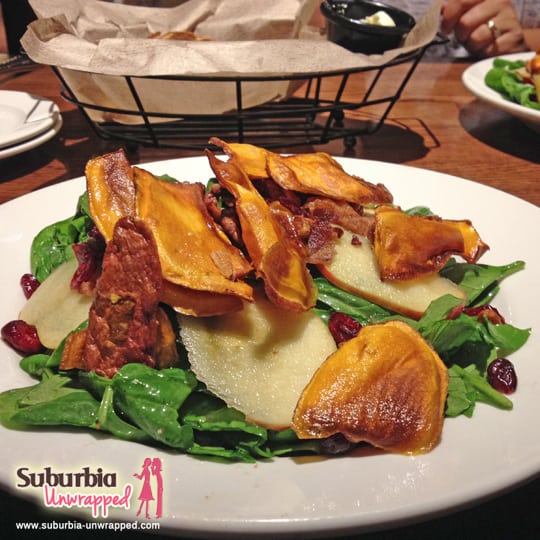 This salad was a really good size...more than just your average side salad!  I was thrilled with the combination of flavors and never would have thought of using fresh sweet potato chips instead of croutons.  Really a great way to bring fall flavors to a salad.  There were also sweet apples and cranberries and fresh greens with a scattering of bacon and pecans for a little added crunch.  The apple cider vinaigrette was a great finishing flavor that tied everything in together.  Definitely a must on my next trip!

I could not resist ordering a side of Brussels Sprouts Au Gratin.  I love Brussels sprouts but since no one in my family cares for them I don't make them a lot.  They are a cool loving crop so fall is a great times to buy them.  Of course, cover them with a creamy and cheesy sauce and a few bread crumbs and I am one happy girl.   This is going on my 'list of things to try and create at home'....maybe I will get to eat them more than once a year if my family likes them as much as I did.  The sauce was light enough that it didn't cover up the flavor of the Brussels sprouts and they were still just a tad bit crunchy and not overcooked at all.  Doesn't this look tasty?

After the sides and salads came the main coarse and the steaks at Longhorn Steakhouse were amazing.  I chose the filet because it is truly my favorite cut of meat and it practically melted in my mouth.  It was cooked perfectly (medium rare, as per my request!) and it disappeared quickly!  They are known for their fresh, never frozen, expertly grilled steaks and I was not disappointed!  It came with a choice of side dishes (there are 7 to choose from!) and since I am a big broccoli fan that was my choice.  It had just a touch of butter on it and was still crisp.  I cannot stand overcooked broccoli and they did a stellar job of cooking it just right! 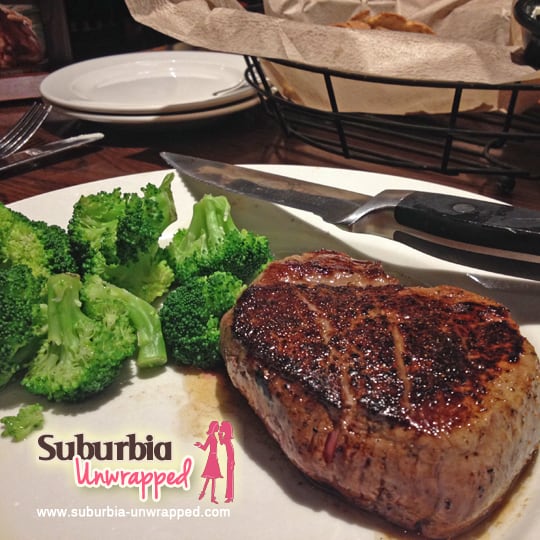 By this point I admit, I am so full I can barely move but my meal came with a choice of desserts and I am NEVER one to pass up dessert!  I chose to get the  Peanut Butter Cup Sundae but if that isn't your thing you can also choose the Cinnamon Sugar Dough Bites.  It was a hard choice but I love ice cream, especially when you top it with chocolate and peanut butter!  It was small enough that it made a great ending to a wonderful meal and I actually found room to eat almost the entire bowl.  What can I say?  I REALLY love ice cream! 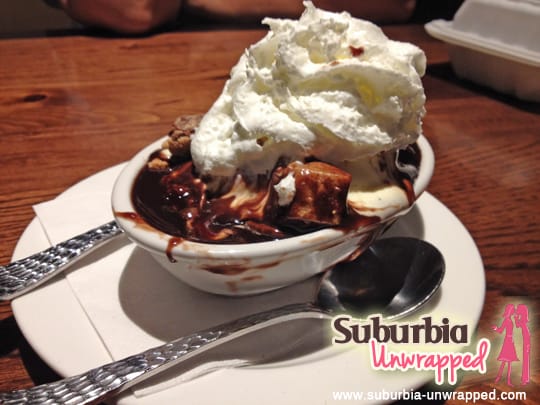 I was seriously impressed with not only the quality of the food but the price.  Their combo makes it very easy to go out for lunch with a friend and leave with a full belly and NOT an empty wallet! 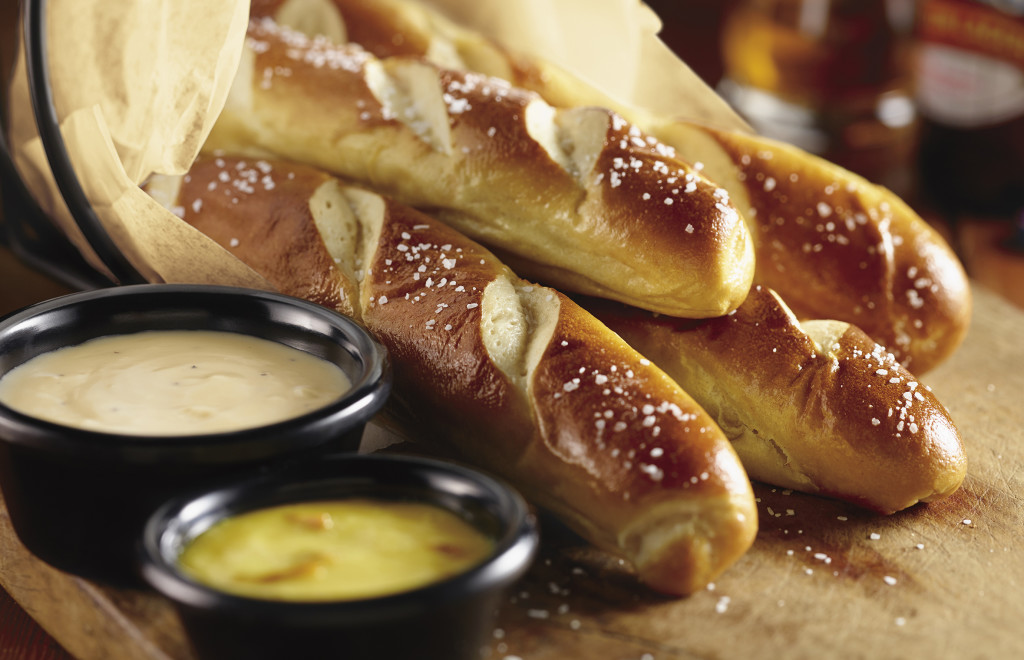 The Chef's Showcase menu includes some unique meals including a Porcini Portabella Ribeye and Pork Osso Buco.  Warm, filling and perfect for fall!  If you would like to learn more about Longhorn Steakhouse's new fall flavors you can connect with them on Facebook.

I had a wonderful experience at Longhorn Steakhouse and the food and the price both ensure that I will be going back again on a regular basis!  I didn't get a chance to try those pretzels up there and I am seriously drooling over that picture right now...maybe next week!

Disclaimer: I received a LongHorn Steakhouse gift card for the purpose of this review. This post was made possible by Mom Spark Media. Thoughts are my own.