This André Rieu CD review has been sponsored however all opinions expressed here are my own.

Music has been a huge part of my life for as long as I can remember.  I joined my elementary school band when I was 10 and learned very quickly to appreciate just about every style of music.  Whether it is a slow and melodic classical piece or an upbeat show tune, there are very few styles of music than I don't enjoy.  I was recently given the chance to preview  André Rieu's newest album entitled "Shall We Dance" and it is truly amazing how much heartfelt emotion can be portrayed in one piece of music.

Who is André Rieu?

André Rieu is a Dutch violinist and conductor who created the Johann Strauss Orchestra in 1987. What started out as a small group of 12 musicians has blossomed into a performing group that ranges from 80 and 150 musicians. The classical and waltz music played by these musicians has basically become a worldwide concert touring act with audience sizes rivaled only by the largest pop and rock music acts. 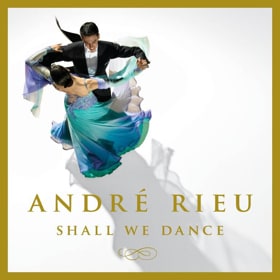 André Rieu makes a splash this fall not only with his new album but also with an extensive U.S. tour and a 10-part primetime series premiering on Ovation TV.  This 10 part, primetime series gives an in-depth glimpse into the artist’s successful career and the many facets of what happens both on and off-stage.

My Thoughts on the André Rieu CD "Shall We Dance"

The collection of songs on the André Rieu CD "Shall We Dance" is truly amazing.

I really enjoyed Carnival of Venice and could almost picture myself at a carnival with the crowds and the Merry Go Round and the millions of games that are always so impossible to win!  Just picture yourself on the midway and the classic music that is always played will come to mind.  That is what this song is...only with the grandiose sounds of an entire orchestra behind it!

One of my other favorite pieces from the André Rieu CD "Shall We Dance" was 'My Heart Will Go On' from Titanic.  There is just such heartfelt sadness in this piece but at the same time it is hauntingly beautiful with bold accents and it honestly gave me chills to listen to it.

Of course, I also just loved Edelweiss from The Sound of Music.  This is a song that so many people already know but the incredibly talented orchestra performing it gives the song a depth that I have never heard before.

The entire album is alive with emotion and while some people don't appreciate the beauty of classical music, André Rieu makes it easy to get lost in the feelings behind the notes.

Purchase the André Rieu CD "Shall We Dance"

Want to listen to the album for yourself?  Check out the full tracklist below.  Target has an exclusive version with two bonus tracks - “Music of the Night” (from Phantom of the Opera) and “Lara’s Theme” (from Dr. Zhivago).  Buy in online at Target.com  or at one of these other retailers.  This album also includes a CD and live DVD from Decca Gold which captures André Rieu's spectacular, party-like live concert experience.

“Shall We Dance” Tracklisting:

DVD content is Andre Rieu at his concert in Schonbrunn, Vienna

While listening to an album is a great way to enjoy this music, watching a live performance is even better! Rieu and his orchestra play over 100 concerts a year and the performances are the kind of spectacle that only a born showman like the fun-loving Rieu could pull off. Over the years, his concerts have featured Mary Poppins flying over the audience, the sweet accompaniment of the Soweto Gospel Choir, and special guests like Jermaine Jackson and Sir Anthony Hopkins. At the end of the performance, thousands of balloons descend from above as the audience demands encore after encore. Check out the video below for a brief taste of this amazing experience!

Are you interested in seeing André Rieu perform live?  Here is a listing of all the stops on the tour.  Buy tickets and don't miss this musical event!