Home » Entertainment » If You Could Be Mine by Sara Farizan

In If You Could Be Mine by Sara Farizan, Sahar has been in love with her best friend, Nasrin, since they were six. But Iran is a dangerous place for two girls in love.   This is a book that my teenage daughter read and absolutely loved.  She recommended I read it when we headed over to London last week so I took it along to keep me busy on the flight.  Let me just say that the person sitting next to me heard some serious sobbing as I finished this story! While there were a few things I didn't like about the book, overall it is moving and brings up a topic that is controversial when it comes to living in Iran.  Read the full review below or shop on Amazon through my affiliate link.

If You Could Be Mine by Sara Farizan 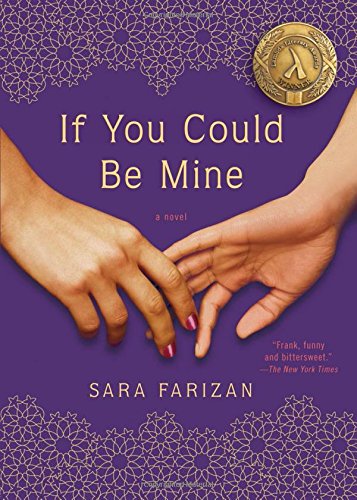 Title:  If You Could Be Mine

About the Author:  Learn more about Sara Farizan by following the author on Twitter.

Book Blurb:
In this stunning debut, a young Iranian American writer pulls back the curtain on one of the most hidden corners of a much-talked-about culture.

Seventeen-year-old Sahar has been in love with her best friend, Nasrin, since they were six. They’ve shared stolen kisses and romantic promises. But Iran is a dangerous place for two girls in love—Sahar and Nasrin could be beaten, imprisoned, even executed if their relationship came to light.

So they carry on in secret—until Nasrin’s parents announce that they’ve arranged for her marriage. Nasrin tries to persuade Sahar that they can go on as they have been, only now with new comforts provided by the decent, well-to-do doctor Nasrin will marry. But Sahar dreams of loving Nasrin exclusively—and openly.

Then Sahar discovers what seems like the perfect solution. In Iran, homosexuality may be a crime, but to be a man trapped in a woman’s body is seen as nature’s mistake, and sex reassignment is legal and accessible. As a man, Sahar could be the one to marry Nasrin. Sahar will never be able to love the one she wants, in the body she wants to be loved in, without risking her life. Is saving her love worth sacrificing her true self?

If You Could Be Mine by Sara Farizan: My Review

If You Could Be Mine by Sara Farizan gives just a small but emotional look into what it's like to be gay in Iran.  Sahar has been in love with her best friend since they were little.  She and Nasrin have moved slowly from friends to 'more than' friends, stealing kisses and romantic moments whenever they can.  Sahar dreams of the day that she and Nasrin can somehow be together for real but when Nasrin's family decides to marry her off, Sahar panics and doesn't know what to do to keep Nasrin for herself.

Sahar has an older cousin who is a wild child.  While he cannot be 'out' in Iran, he has a community of LGBT people that he hangs with.  He is also involved with drugs, bootlegged movies and an assortment of other questionable and very illegal activities.  He introduces Sahar to a transgendered individual and Sahar things that she has finally found an answer.  Unfortunately, things don't go anywhere near as smoothly as she things they will.

This story is incredibly moving and brought tears to my eyes.  The realities of life in Iran for a gay person are downright depressing.  The author does an amazing job of setting the story....there are tidbits about Iranian culture, food, family and law that I found fascinating.  I definitely wanted to keep on turning the page to learn more about Sahar's life as well as her struggles to find a way to stay with Nasrin forever.

There were a few things I thought might be unrealistic in this book.  Sahar is incredibly bright but apparently thought that sex reassignment surgery would be easy.  She had to have known exactly what that surgery and hormone therapy entailed but she seemed completely clueless.  It just wasn't all that believable to me.  And honestly, Nasrin seemed like a self-centered and spoiled child.  I'm honestly not all that sure what Sahar saw in her.

Just a fair warning.... If You Could Be Mine by Sara Farizan does not end happily.  If you are looking for the couple to ride off into the sunset together, don't read this book.  But, the ending is (I think) a realistic one that most gay couples in Iran probably end up living.

Overall, I enjoyed If You Could Be Mine by Sara Farizan.  It had a few flaws but was also moving and I enjoyed learning more about Iranian culture.